Colorado city cuts estimated meter reads by 94%. For the past 14 years, Randy, a technician for the City of Evans Water Department, has devoted days out of every month to driving the streets and reading each of the city’s 6,500 water meters.

Despite his hard work and long hours, the reads frequently were inaccurate due to estimated data provided by antiquated meters. Plus, the process took so long that there often was not enough time to review the data before the bills went out the door.

Imagine toiling from home to home, driving the city for miles, to find your work was for naught. That is the situation in which Randy and his colleagues found themselves.

Customers were not wowed by the process either. With the technicians tied up for days each month manually reading meters, the utility struggled to provide customers with the best possible service.

A Growing City With a Growing Problem

Located about an hour north of Denver, the city of Evans, Colo., has approximately 20,000 residents and is growing fast. So fast, in fact, that the recently-built Prairie Heights Middle School is already at capacity.

The utility’s patience was at capacity, too. Inaccurate reads and aging meters frustrated staff and hindered well-meaning intentions to affect customer satisfaction. A case in point: the meters were so old that approximately 700 customers were billed using estimated water use, some for as long as four years. The result: incorrect monthly bills for nearly one quarter of the city’s residents.

Furthermore, the reads took so long that after technicians finally collected data from the aging meters, the billing department had to rush to get customer bills out the door. This rushed process provided very little leeway to the billing team to examine the invoices for potential leaks and other problems affecting customers.

Technicians like Randy knew that the growing population would mean adding even more customers to an already broken process—like adding more bricks to an already crumbling foundation.

Smart Technology for Customers & the City 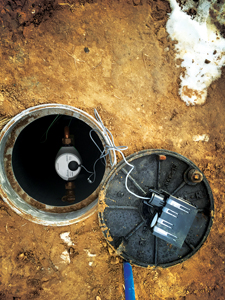 The city of Evans worked with Sensus to deploy a smart water system, with commercial water meters and a communication network that improve billing accuracy, to cut the time it takes to conduct reads and better serve customers.

The upgraded technology helps the city meet its customer satisfaction goals, too. With the extra review time during the monthly billing process, the water department can catch issues before they are reflected on its bills—a win for customers who learn about leaks sooner and a win for city of Evans employees who no longer have to deal with contentious customers calling about their high water bills.

The smart water system has empowered the utility to decrease the number of estimated meter reads from 1,500 to 74. This 94% reduction has improved operational efficiency and customer service. At the start of the monthly billing process, Evans receives accurate usage data—without the need for technicians like Randy to drive the city’s streets.

The water department also reduced the number of manual meter reads it conducts by 84%. This means that Randy can use the time he previously spent reading meters to help customers. Now when Randy visits a home or business, people know that he is there to help solve a problem or improve their service, rather than just to grab a reading from their meter. Armed with data collected from the new meters, Randy is making a difference with customers.

The city can rely on this future-proof, scalable solution as it moves forward in its quest to be an “economically diverse, self-sufficient community providing a clean, safe, family-friendly environment with growth-oriented infrastructure.”

As a growing community, the city of Evans is poised to handle utility billing for its new residents with greater efficiency and accuracy. No matter how many people call the Evans community home, they can count on superior service from the city’s dedicated staff and smart water system.

Sorry, the comment form is closed at this time.